Gossip is Grounded in Disrespect 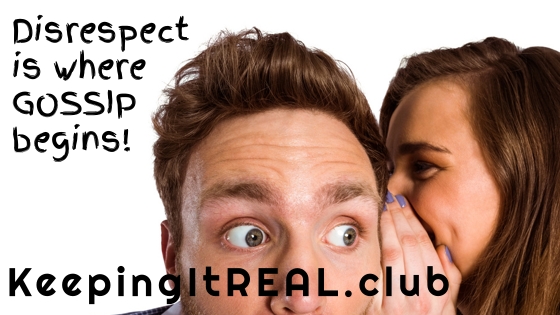 It seems to be inevitable. You’re talking to a couple friends about things that have been happening to each of you but the conversation slowly drifts. Before long, instead of talking about those of you who are there in the room, you start to talk about your friends who aren’t there. Then you move on to other acquaintances and maybe people you don’t really know.

It’s so easy for gossip to begin. We’re naturally curious creatures, so when we hear that someone heard that someone else did some questionable thing and some other person got upset and so on, and so on… When that happens, we need to stop. Even though a part of us might really want to know the juicy details of the story, we need to refrain from taking part in the gossip.

Gossip is generally defined as “casual or unconstrained conversation or reports about other people, typically involving details that are not confirmed as being true.” Gossip is dangerous because the facts are unverified and, as they get told from person to person, the usually morph and change.

Gossip is based upon disrespect, so the best way to stop gossip is to start from a place of respect! Click to Tweet

I have played the Telephone Game dozens of times over the years and I have never seen a message go around the circle unchanged. And even though the game is a bit contrived because you have to whisper the message only once, it still demonstrates how gossip changes as it spreads. Generally the details are embellished and someone’s conjecture gets relayed as a fact – and it’s rare that those changes benefit the person who is being gossiped about.

Everything we do should start from a foundation of respect. Gossip, by contrast, is founded on disrespect. Stories are passed from person to person, without regard for the fact that someone could end up getting hurt. In some cases, the stories being shared started with secrets or other information that was shared in confidence – information that will cause someone very real pain if it’s revealed.

So how do you tell the difference between gossip and simply sharing stories about people you know?

Start by considering the consequences. Will telling the story hurt or upset anyone? Will it make help someone or make someone feel better?

Then think about your reason for wanting to share the story. Is it something that the person you’re talking to needs to know? Do you want to tell the story so people think you’re “in the know” or somehow have the inside scoop on what happening? Or do you truly believe that sharing the story will help someone?

Finally, if you believe that it’s not “gossip” and you should share the information you have, make sure you stop and consider the source. Did you hear it directly from the person it’s about? Or did you hear it second- or even third-hand? If you’re not sure the source of your information is extremely reliable, you should still be cautious about sharing because you could end up unintentionally starting some gossip!