Reflection for the Fourth Sunday of Advent (Cycle C) 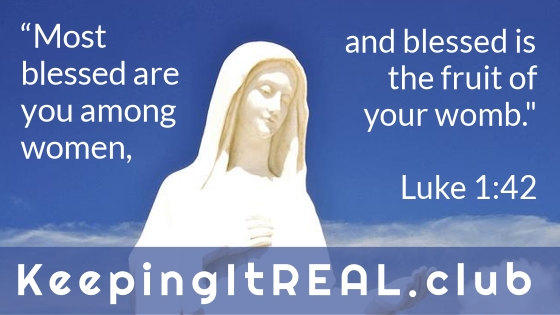 Before They Were Stars

One show that is always popular on whatever network chooses to show it is a “Before They Were Stars” special. Who could pass up a chance to see Scarlett Johansson looking extremely awkward or Duane Johnson doing a song and dance routine in his kitchen? These moments are priceless. Our salvation history contains these moments too. We don’t have any video or ultra sounds to prove it but John the Baptist was a mover and shaker, even in the womb.

First Impressions Are Everything

When the pregnant Mary met the pregnant Elizabeth, John the Baptist leapt in the womb and Elizabeth said, “Blessed are you among women.” When Christina Aguilera first met Britney Spears and Justin Timberlake in the Mickey Mouse Club, she said “You two are going to break up.” Did either of these two events really happen? We don’t know for sure, but they make great Christmas cards!

Actually, what they have in common is that they explain later events. Today’s gospel foreshadows the future relationship that Jesus and John the Baptist are going to have. John’s ministry predates Jesus’, and he is the one whose excitement helps to catapult Jesus’ ministry.

No one cared about an unwed pregnant Jewish girl and her elderly cousin. It wasn’t until after the importance of Jesus was realized that people in the faith tradition had to decide what stories could explain the life of someone so great!

Not Your Typical Stage Mom

In true “Before They Were Stars” fashion, the story of Mary and Elizabeth shows that great people often come from humble origins. Mary is a young girl with an unexpected pregnancy. Today, one would think that Elizabeth would condemn her for that. Yet, Elizabeth sees God’s plan and understands Mary’s courage in accepting God’s plan.

But Elizabeth does more than simply accept Mary’s pregnancy. She cries out in a loud voice and proclaims how blessed Mary is. There aren’t many people who cry out in a loud voice in the Bible (something about being quiet in church?), but the ones who do are usually prophets.

In a way, Elizabeth was the first “John the Baptist.” It’s from her that John gets his tenacity to proclaim. She sees in Mary something great and is willing to put her feelings into words.

Many stars come from small towns and Jesus is no exception. In the reading from the prophet Micah, we hear how a great leader will come from Bethlehem, the smallest of the clan of Judah.

Now, I teach American Literature and we read a lot about rags to riches stories and the American Dream. One might say the life of Jesus is yet another case of a small town guy becoming famous. Actually, I think our great American poet Walt Whitman had the right idea though.

In Whitman’s poem “I Sing the Body Electric” he praises the body. He praises everybody’s body: Men, women, slaves, prostitutes. It doesn’t matter where they come from; these bodies contain something that is sacred. Most importantly, they contain the hope for future generations. In other words, you might think that that bum on the street is a loser, but from him could come the woman who cures cancer. You might think that that woman who is on welfare isn’t pulling her weight, but from her could come our next president.

I can’t hear that poem and not think of Mary and Elizabeth. Who was Elizabeth anyway, having a kid so late in life? How could she possibly take care of it? And who was Mary anyway? She didn’t have the means to raise a messiah. Yet it is their ability to see God’s plan － even in an imperfect world － that makes them legendary.

Whose words of encouragement have made a difference in your life?
Could you devote just one day to consciously praising the good qualities of someone? What if it were someone you have difficulty getting along with?
What talents have you yet to share with others?